VSE has an extraordinary history of providing integrated enrichment programs for classes at all grade levels. From art, writing and music residencies, poetry festivals, inter-island collaborative events and much more, VSE has enhanced the education of our children since 1999. 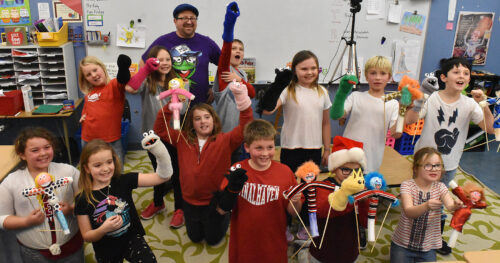 In December, Eric Weiss, aka Homeslice, brought his puppet-building skills and artistry to VHS for a week-long residency with grades 3-8.

Eric brought wonderful examples of his own puppets, and trunk-loads of materials with which to make a range of puppets: from sock puppets, to simple mechanism puppets, to complicated foam patterned hand puppets. Eric was as good a teacher as he was a puppet maker. He was creative, inspiring and fun to be with, as well as patient, practical, and well-prepared for working with all age groups. Each student designed and built their own puppet.

Emily Cohn’s middle school STEM class made the most technically complex puppets, with latex-covered heads in wild colors. Grades 4-5 had the goal of creating Muppet-style puppets that reflected characters from stories written with the Telling Room earlier in the fall. Grade 3 made sock puppets, simple stick puppets.

The students had a blast working with Homeslice, and created wonderful puppets – every one filled with individual personality, humor and lots of attitude! 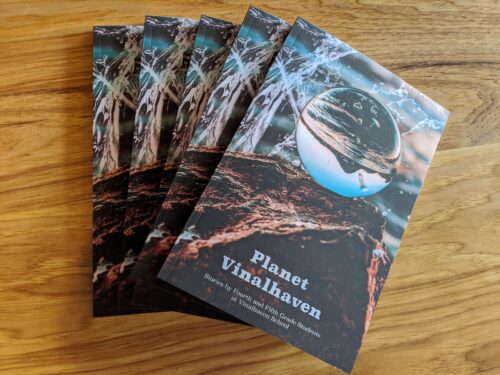 Grades 4 and 5 were very fortunate to partner with The Telling Room of Portland, Maine, whose mission is to “empower youth through writing and share their voices with the world”. Working together during  six-week residency (two days/week), they created Planet Vinalhaven, a book of student writing. Teachers Pat Paquet and Robb Warren gained valuable knowledge working with the three lead teachers from The Telling Room, Caitlin Schick, Willie Ulbrich, and Nancy Lloyd. It was a very rewarding experience for everyone involved. A book signing celebration will take place in fall 2020.

“I really liked the Telling Room because of the fact that they give us a topic to write about, so we never have writer’s block. The topic also gives you room to write differently from other people, and interpret it a different way. Another thing that is fun is the fact that our work gets published into a hard cover book. It makes you feel like a successful writer.” 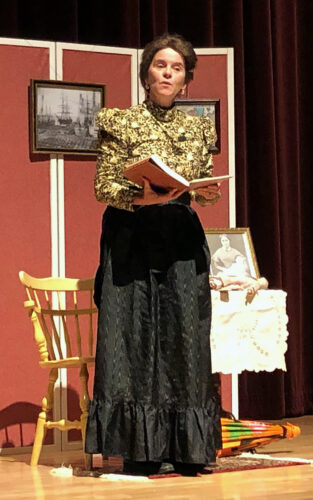 Anne Barrett gave a wonderful performance of Life Aboard a Whaling Ship for students and community members. Anne portrayed Mary Chipman Lawrence, who spent over 3 years in the 1850’s on a whaling ship with her captain husband and young daughter. Drawing from Mary’s journal of the voyage, Anne brought alive the perils and pleasures of her life at sea, and in sang sea shanties sung by the sailors as they worked.

Students were “really drawn into the stories” according to one 3rd grader, and they especially liked the songs! The performance was “perfect for the 7th graders” in American History, as they focused on the pre-Civil War period of expansion and studied whaling, westward expansion, and the gold rush.

Anne, a long-time seasonal resident of Vinalhaven, specializes in historic presentations and in-character portrayals of women in history. 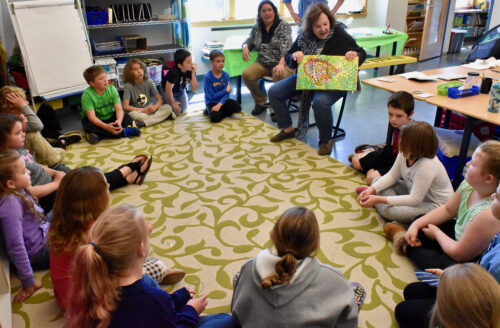 In May, Leaps returned to Vinalhaven for a fourth time.  “LEAPS of IMAGINATION is an in-school art program that interweaves literature, environmental, and social justice themes into long term projects for students at the elementary school level. Over the course of three weeks, in two-hour time blocks, students explore diverse mediums, journal, and collaborate with their classmates on topics that focus on stewardship.”

“Children in Vinalhaven’s second and third grades each selected and studied a creature that interested them, researching their animal from a collection of age-appropriate non-fiction books. Identifying their animal’s attributes, they discovered how they nurture their young and how they live and thrive with others in their environment. Using wooden pieces and other textured materials, they created oversized collagraph plates from which to make animal or insect portraits. Their final project was a double collagraph portrait of partners’ two creatures.”     Nancy Harris Frohlich, Director 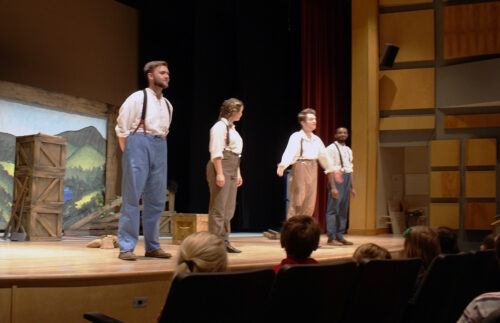 On April 29th, four friendly, energetic young actors arrived off the ferry in a van filled with mountains, orchards, railroad tracks, a giant blue ox, and flies the size of platters—all for the performance of their 2019 show: Tales Tall and True. The actors performed three favorite tall tales—Paul Bunyan, Johnny Appleseed and John Henry. Plus, the suspenseful, true story of Kate Shelley, who crawled 600 feet over a raging river on a stormy night to save a passenger train. Inventive staging turned packing crates into front porches, bridges, caves, tunnels, barnyards, and finally, a trestle bridge high over the Des Moines River. After the performance, the actors sat down with the audience to explore the ‘words to live by’ embedded in the stories. Everyone agreed on the main message:
“Help others, do your best, be brave when you’re scared.” Anything else? “Yes,” piped up a student, “Always listen to your mother.” 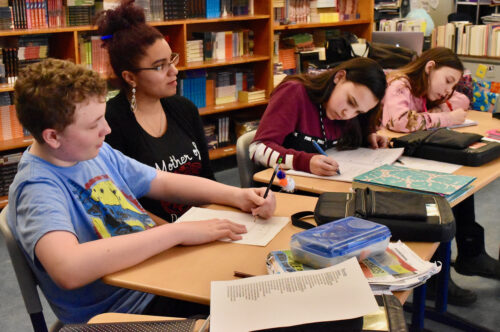 The Port Veritas Poetry Workshops have become a highly anticipated cornerstone of creative writing in Vinalhaven School. For a fourth year, Nate Amadon and Robin Merrill challenged, inspired, and fostered
working relationships with middle and high school students. Even reluctant writers responded to the various prompts Robin and Nate offered them. Some students brought out last year’s poems to read again. 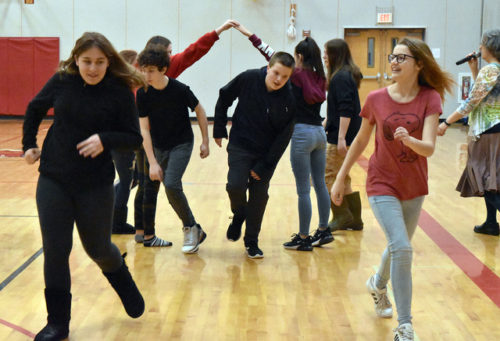 In the cold doldrums of March, just before our two-week winter break, we had fun and stayed warm contra dancing with Chrissy Fowler, a master teacher and one of our favorite visiting artists (this is her 4 th visit). Chrissy taught contra dances to all ages, with PE teacher Jake Tuminski as her enthusiastic host and assistant. Musicians Julia Plumb and Baron Collins-Hill, of Velocipede, came to play for the dancers and taught contra dance tunes to high school musicians, along with music teacher Bill Trevaskis.

On Thursday, March 7, we had a community pot-luck supper, followed by a rousing contra dance in the gym. Velocipede was joined by local and high school musicians, making for a very fun and festive evening for all ages! The general consensus was “let’s do it again”! 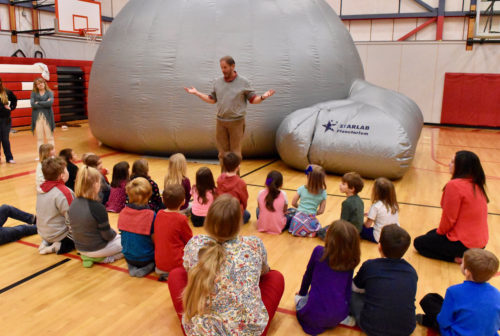 John Meader brought his magical inflatable super-dome planetarium to the Vinalhaven gym for one day in the deep of February, and took students on a trip to the planets, start, galaxy and beyond. There were three programs: Stars (middle school), Earth, Our Place in the Cosmos (gr. 3-5), and Our Family in the Sky (K-2). Each program was totally age-appropriate and engaging. All aligned perfectly with curriculum. John had a good way of describing things for each age group, with cultural references that were appropriate and relatable for kids in Maine. It helped students connect and absorb the information.

This is a return visit for Northern Stars. VSEC invites John every few years so that students can experience different programs at different ages. Many students asked when he was coming back. Some of the older students remembered the dome from 2015. Others can look forward to seeing it again in 2022! 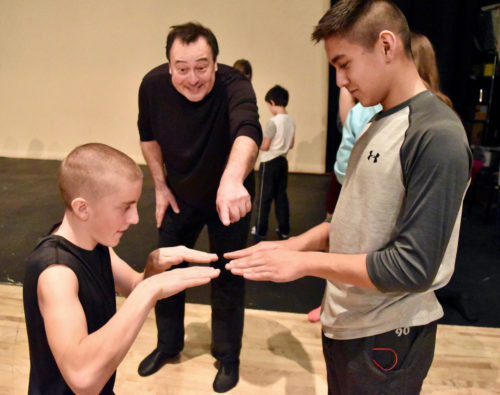 Leland Faulkner, Maine actor, mime and magician, spent three days at Vinalhaven School during late January 2019, and his visit couldn’t have come at a better time to liven up our School in the dead of Winter.  His performance, World of Wonder, was magical, showing us amazing things you can do with your hands (shadow play), paper (origami), and storytelling (magic). He was an excellent, inspiring teacher, with theater games and physical theater activities that were fun and engaging for all ages. 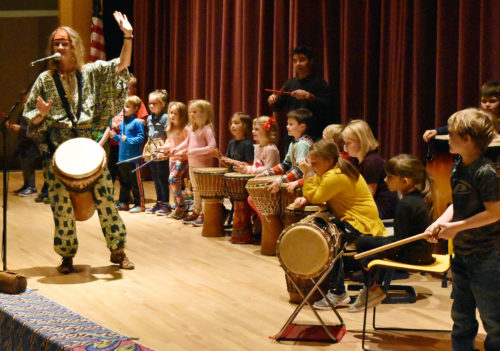 Annegret Baier is a master percussionist who teaches West African drumming and performs solo and with several bands around New England. She came to Vinalhaven School from November 28-30 for a wonderful three-day and worked with students in Grades K-12 in learning all about West African drumming, rhythm, and culture. Annegret introduced the students to specific rhythms and brought an enormous array of drums from Gambia and Ghana. As part of the residency, high school music students performed some wonderfully complex music at the Student Recognition assembly with Annegret. The following day there was a special assembly for K-5 students that gave them the opportunity to perform on the stage with Annegret and teacher Bill Trevaskis. They did such a good job! Annegret performed solo as well and “wowed” everyone with her incredible musicianship. We were pleased that parents and members of the community also came and enjoyed the assembly.

This is Annegret’s second residency at Vinalhaven School. Her first was in 1997, in the old school, almost 20 years ago!

Click the below links to see what exciting programs Vinalhaven School Enrichment has had in years past or to view our gallery!